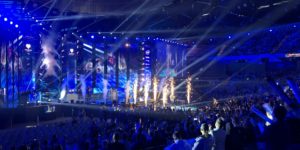 In the Issue of the International Journal on Media Management, a special issue edited by Tobias Scholz was just released. The focus was on the deciphering the world of esports and how this field is impacting the current media management research. Esports is a unique industry that has elements of media on it, but at the same time, it is still neglected by media management research. The issue is highlighting esports as a potential contribution to the field in aspects like the changing role of the consumers having a stronger influence on the media process, moving from global to local, and online to offline or the changes in media engagement in a digital environment. Esports has the potential as a research case for the path to digitize media management and, additionally, create sustainable business models in the digitized society.

Besides an editorial with the title “Deciphering the World of eSports” (the journal decided to use eSports as the dominate form of wording in academia at that time), the special issue consists of the following papers (quoted from the editorial):

“In the first paper, “Gamers First – How Consumer Preferences Impact eSports Media Offerings,” Zeran Ji and Richard C. Hanna highlighted that the consumer is the core of the business model of any stakeholder in the eSports media landscape. As eSports can be consumed online and offline, it is still unclear if there is a difference in the perception of traditional and digital media offerings. In this empirical research, the authors focused their research on the consumer and how they feel engaged by the content. Especially interesting is that the topic of data becomes relevant for the consumer, and this will become an increasingly relevant topic for eSports and media management in general. The utilization of consumer data and the perception of this usage is linked with the success of the business model and, subsequently, should be part of any business model innovation process and strategic management. This paper shows the crucial insight eSports can give to the digitization of media management. Consumption of media content online and offline might differ, but both are essential for the business model. The question of how to engage with the consumer can be answered multi-faceted and should be continuously reevaluated in the fast-paced modern media-landscape.

In the second paper, “Shaping a regional offline eSports market: Understanding how Jönköping, the ‘City of DreamHack,’ takes URL to IRL,” the Brian McCauley, Kieran Tierney and Dinara Tokbaeva highlight the unique setting of eSports. As eSports is a digital and global phenomenon, moving toward a regional or local market is following different rules than any other industry. The eSports stakeholders have to move from a global mindset toward a regional and local mind-set to anchoring an eSports ecosystem toward regional constraints. The authors used the case of Jönköping as the City of DreamHack as one of the current best-practices. Jönköping became synonymous with eSports by showing the potential of regional framing. This development is especially interesting for media management as the majority of the literature is discussing the process of going online or going global, rarely even think about the different process of going offline or going local. Thereby, this paper adds a different point of view to the media management literature, which can be insightful for understanding the process of digitization and globalization.

The third article, “Diversify or Not? Uncovering the Effects of Identification and Media Engagement on Franchise Loyalty in eSports” by Bastian Kordyaka, Katharina Jahn, and Björn Niehaves continues highlighting the added value by researching eSports in a media management context. Based on empirical research, they tackle the question of media engagement and franchise loyalty in eSports. Especially the insights concerning the strategy of diversification and the link toward competitive advantage are relevant for the question of creating a sustainable business model in eSports as well as in the media industry. Consumers are becoming more involved in the media process, and, especially in eSports, they are an essential part of media engagement. Understanding the interactions between the producers and the consumers of media content in eSports can help to understand the media engagement in other content fields that are in the strategic change process of digitizing themselves.”

It becomes evident that esports is a growing industry and the ongoing discussion about a bubble highlights, that esports also needs to grow in terms of professionalization. Even though Covid-19 gives esports a front seat in the media sphere, the utilization of this chance is a bit underwhelming. To this day, esports companies are struggling to become a profitable business model, even though, they have, seemingly, a chance of a life-time. Understanding esports from a media management perspective is not only relevant for media management researcher, but also for any esports stakeholder.