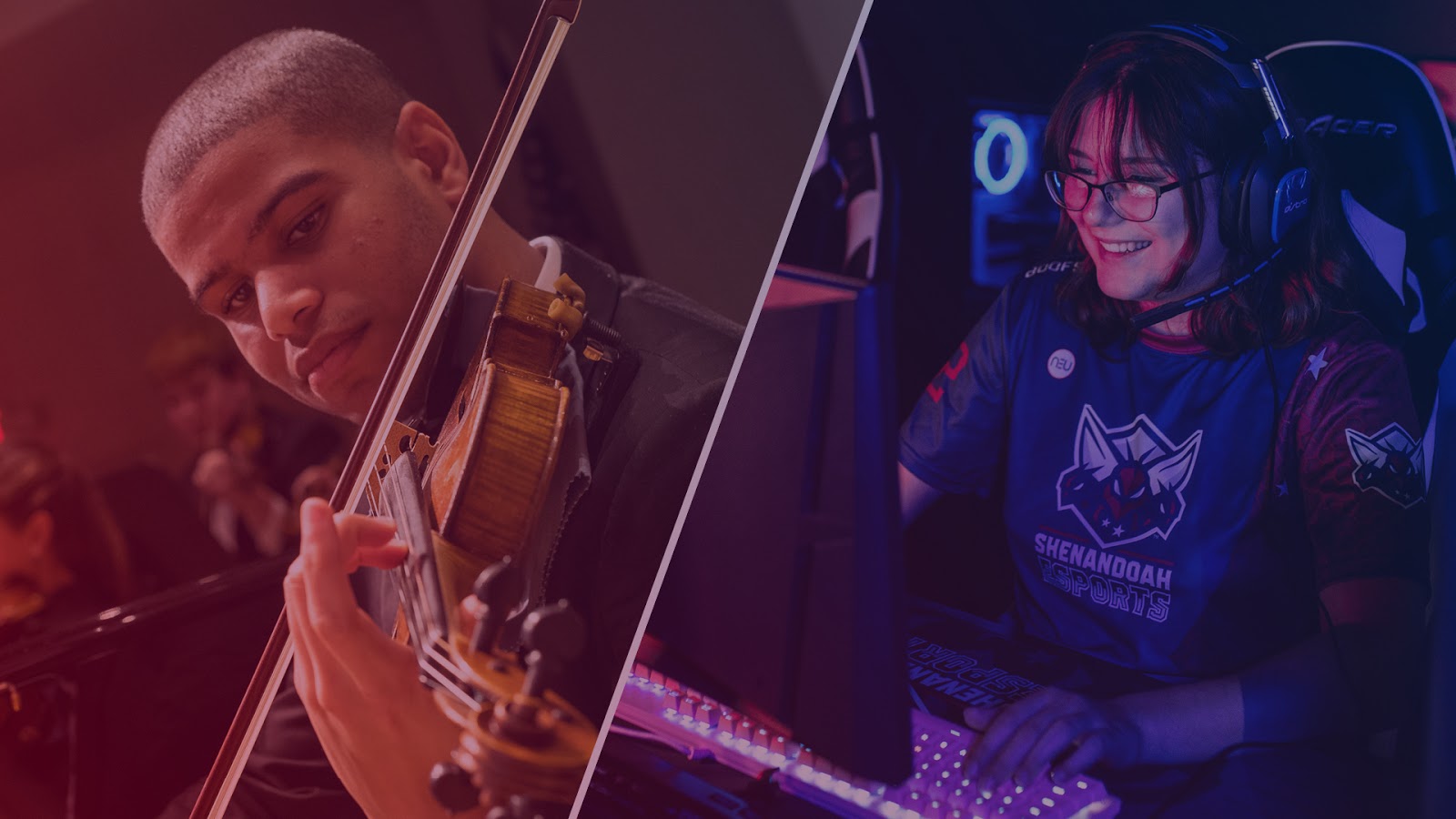 We Play Together: A Collaboration Between Music & Esports – James “Aaron” Hardwick (conductor, instrumentalist, and music advocate)

I made the transition from professional instrumentalist and educator to conductor in 2015.  A huge portion of my life until that point was spent practicing and playing the viola.  I oddly enjoyed the process of practicing 8+ hours on end to perfect a technique or a difficult piece.  I loved the payoff and thrill of performance.  Twelve years later, I decided to go back to school to study conducting. When I began my professional career, I found myself leaning towards video games as a hobby – a way to de-stress after long hours of practice and teaching.  It wasn’t until a couple years ago that I began to play Apex Legends.

Those that play, know that Apex, is by far one of the most difficult aim and movement battle royale games out there.  I distinctly remember watching TSM_Albralalie publishing a Q&A video on YouTube in July of 2020 about his career and the process by which he believes someone must be a pro player.  What struck me was the way he spoke of aim, commitment, and grinding.  As a professional musician, this resonated with me immediately.

It was in the middle of the COVID-19 pandemic, and like most everyone, I was working from home.  It was fall break 2020 for us here at Shenandoah University in Winchester, Virginia, USA. I had finished my work for the day and decided to play some Apex Legends.  During this week, I wanted to increase my rank. So, like most people, I got on YouTube.  After finding a few firing range training videos I liked, I turned on my XBOX, grabbed my controller, and decided to try them.

I remember the moment: 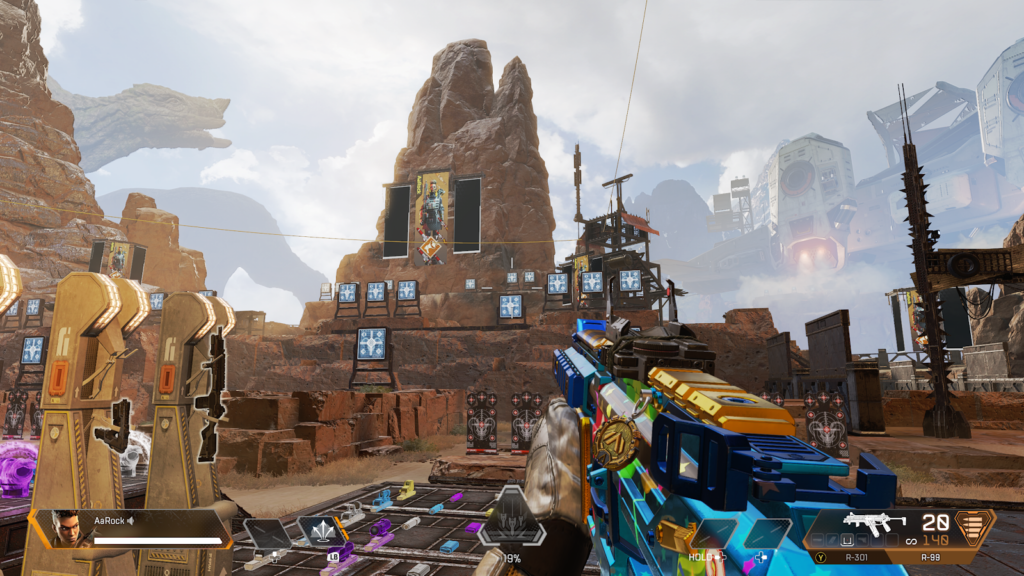 And then it hit me…I WAS “PRACTICING!”

Like a  movie flashback my brain immediately turned to a recent practice session on viola. (I was hired by a theatre company for a virtual performance during COVID-19 and had a difficult passage in the music I was trying to perfect.)

It was all there – I was listening and watching, I was analyzing, I was correcting.  The process of cyclical learning was the same in music and video games.  And, there was more.  My brain began to spin with ideas.  I pulled out my phone, opened a blank note, and began to type.

What I spent the next hour typing, became an official proposal to Shenandoah University for a collaborative project to premiere in the Spring of 2021.  As a professional musician and casual gamer, I began to realize the similarities between the worlds of music and esports.

At the time, I was in correspondence with Joey Gawrysiak, Director of Esports at Shenandoah University concerning our first-ever offering of Video Game Music.  During these talks, I began to relay some of my initial thoughts concerning We Play Together (WPT).  He was immediately on board.  We both realized the powerful implications for this kind of trans-curricular study unique to our school (which houses both a Conservatory and Esports program). Further, the conversations that spawned, showcased an innovative cross-disciplinary learning and research model that could be used on a broader scale.

We spent the next weeks planning and putting together a team of people across multiple disciplines of our university that were equally excited about this project.  In addition to myself and Joey Gawrysiak, the academic team includes Shenandoah University student performers; Esports Head Coach and Assistant Director Zach Harrington; Instructor of Esports Chris Scroggins, M.S.; Assistant Professor of Trumpet Mary Elizabeth Bowden, M.A.; and Associate Director of Performing Arts Medicine and Assistant Professor Division of Athletic Training Michele Pye, Ph.D.

At Shenandoah, we have already begun to make exciting discoveries between disciplines.  This kind of collaboration brings fresh life, especially during these seemingly difficult times.  Our philosophy behind the project is one of joy, discovery, and wonder that music and video games have to offer.  Even in the initial stages of this project we understood the importance of  sharing this with students, faculty, gamers, musicians, and the academic community at-large.  We want to bring about community and collaboration.  Hence, “We Play Together.”

We Play Together: A Collaboration Between Music and Esports premieres online at 1:30 p.m. on Wednesday, April 28, and audiences can access the free livestream via the Shenandoah University YouTube channel, Shenandoah Esports Twitch channel and Shenandoah Conservatory Facebook page. Audiences are invited to submit questions via the Twitch chat section and Facebook comments. Visit www.su.edu for more information.

James “Aaron” Hardwick, is a conductor, instrumentalist, and music advocate.  He is currently an Adjunct Instructor and Teaching Fellow of Instrumental Ensembles at Shenandoah Conservatory, Winchester, VA USA. Hardwick teaches the first offering of Video Game Music in conjunction with the Esports program at Shenandoah University. He is currently finalizing a Doctor of Musical Arts in Performance (Conducting) at Shenandoah Conservatory. He earned a master’s degree in orchestral conducting from the University of South Carolina and a bachelor’s degree in music with honors from East Carolina University. Mr. Hardwick is an avid gamer who loves all things music and video games.  Visit him at www.jaaronhardwick.com, on Twitter @HardwickMusic, Instagram @aarock, or on Discord AaRock#6483.

or project correspondence or media please use the following: